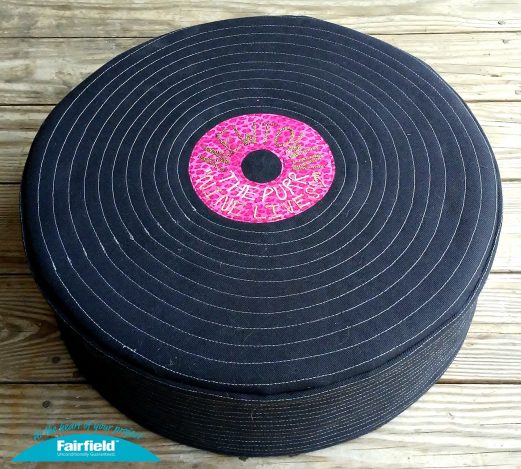 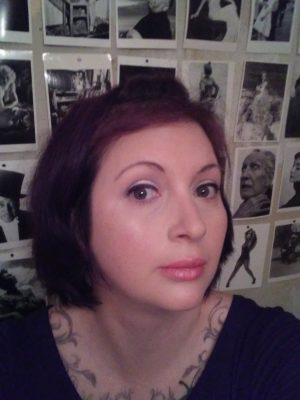 Made by: Abby Davis

This cool cat record tuffet is inspired by my love of vintage records and my two tuffet using cats. After I made the Floral Embroidered Floor Pouf, my cats fought for who got to lay on it. So of course, we need two tuffets for two cats. This tuffet is much easier to make than my floral pouf. I used the same Soft Support Foam Tuffet. For the record cover, I used solid black denim backed with Smooth Fusible Fleece Interfacing. A scrap of hot pink leopard cotton, adhered with Stick Double Sided Fusible Interfacing and topstitching, forms a center label. For the lettering, I used Kreinik Iron-On Medium Braid and Ribbon with a Dritz Petite Press Portable Mini Iron. This record tuffet can be customized with your favorite band and colors. Don’t be limited by a classic black record, because records come in many colors and styles.

Place the tuffet on the black denim. Trace the circle shape 1/2″ larger, with the dressmakers pencil. Cut out the larger circle. Use that to trace a 2nd circle on more black denim. Cut out that circle too.

On the pink leopard fabric front, either use round objects or compass and the dressmakers pencil, to draw two circles, one small circle inside a medium circle, forming a donut shape. Cut a piece of Stick interfacing slightly bigger than the medium circle. Turn the iron to Cotton with the steam off. Rip off a piece of parchment paper and fold it in half. Open the parchment paper. Place the pink leopard fabric face down on the parchment paper. Lay the Stick interfacing on the fabric. Close the parchment paper. Press the parchment paper with the iron, holding it in place for 10 seconds at time until the Stick is fused to the fabric. Remove the iron. Let the paper cool for a minute. Peel off the fused fabric. Cut out the two circles. The smaller circle is scrap. Place the donut shape on the center of one black denim circle. Press the donut shape with the iron. Again, keep the iron in place for 10 seconds at a time, until the donut is fused to the black circle. This will now be the top of the tuffet cover.

Turn the iron’s steam setting on. Cut out 2 pieces of Smooth interfacing slightly bigger than the black circles. Cut a piece of Smooth interfacing slightly bigger than the black rectangle. Layer the black pieces on top of the Smooth, making sure the adhesive side is touching the fabric. Iron the Smooth and fabric pieces together. Again hold the iron in place for at least 10 seconds, before moving to another section. Make sure to fuse the edges well. Be careful around the edges to not let the iron touch the adhesive. If you are worried about steady ironing skills, put a piece of parchment paper on top of the fabric and Smooth, to protect the iron. Cut away the excess Smooth. Flip the fused pieces over. Iron the fleece Smooth side, to ensure fusing is complete.

Load the sewing machine with grey thread. Set the stitch length to 4, for topstitching. Stitch straight lines about 1/2″ apart, along the rectangle piece. Cut away excess thread. On the circle top, stitch concentric circles, about 1″ apart, making sure to backstitch when a row is done.

Load the sewing machine with black thread. Topstitch around the pink donut 1/4″ from the edges.

Plug the Dritz Petite Press Portable Mini Iron in. Adjust the head to a comfortable angle, but turning the right lock fully open and bending the iron head with your hands. When you have it in the desired position, tighten the lock back. Flip the stand down if you want. I found laying the iron it it’s side worked well for the project where I needed to pick it up and lay it down often. Turn the mini iron and set it to 4. The higher the setting (4 is maximum) the better the thread adhesive will melt and fuse to the fabric.

I kept my album cat themed. You could pick a real album or make up your own. I started with the Kreinik Iron-On Ribbon in 6270 Gilt for the record label name, “Mewtown”. I counted the label name letters. I had long nails when I made this, but tweezers would be effective too. If you make any mistakes, simply heat the thread again, and remove or nudge it with tweezers.

Match up the side panel to the top black circle, right sides together. Use straight pins to secure. At the sewing machine, sew the side and top together, 1/2″ from the edge, carefully following the circle curve and catching both pieces of fabric. Cut slits every 1″ around the circle seam, making sure not to cut through the thread. This will help with shaping.

Where the side ends meet, fold them inwards, to overlap. Overlap the side edges. Straight stitch a seam where the side edges met the circle. Top stitch this seam. Cut off the excess fabric. Somehow I forgot to add the extra 2 inches to the rectangle length, so I had to add a patch. Same method though, but twice, to seam the patch.

Lay the other black circle on the exposed tuffet bottom. Tuck the edges along the side. Fold the cover sides inward, to met the circle edges. The sides need to be tight. Use straight pins to secure the bottom seam. Using a hand sewing needle and black thread, sew the bottom seam using an invisible stitch.