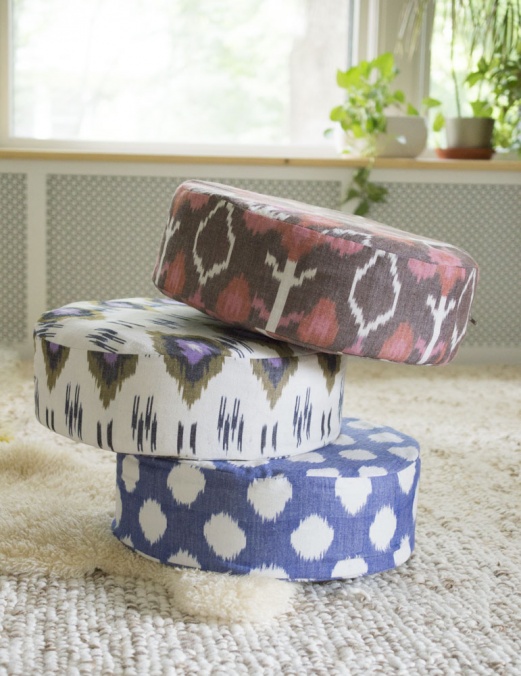 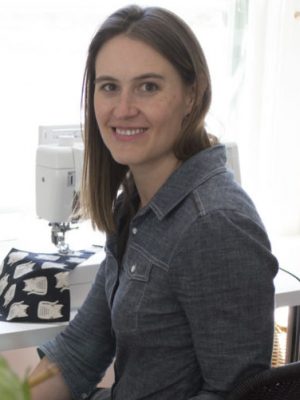 Made by: Melissa Quaal

Nothing makes a home more comfy and casual than a floor pouf! Fairfield foam tuffet inserts paired with sophisticated fabric make for a bohemian living room that invites everyone to lounge around and hang out together.  Plus, they are so easy to make! And kids love lolling around on them.

Add this stunning home decor item to your home in an afternoon!

Fold your fabric in half so that the selvedges meet. Trace an outline of the foam tuffet onto your fabric with a marking tool.

Remove the foam tuffet and use a sewing gauge to add 3/8″ all along the circumference of the circle you drew.

Cut the following from your fabric:

Prepare your foam tuffet but shaping it a little bit:

Wrap strips of quilt batting about 6.5″ wide around the foam tuffet such that the ends meet at the bottom.

Add a bit of glue to hold them in place.

Set it aside to dry.

Attach the zipper foot to your sewing machine.

Pin the small zipper tab fabric to each end of the zipper.

Press the fabric, once sewn, away from the zipper.

Pin the 3.75″ by 19″ rectangle of fabric over the zipper, right sides together, so the right side of the fabric aligns with the twill tape edge of the zipper.  The zipper should be centered in the middle of this fabric.  Do not worry if the zipper tab fabric sticks out, we will be cutting it away later.

Sew just to the right of the zipper.

Repeat the same thing for the other side of the zipper tape.

Press all fabric away from the zipper.  It should look like this.

Trim away edges of your zipper pieces so that it measures a clean 6.5″ by 19″.

Now we are at the final step in creating the sides of our foam tuffet.  Pin each short end of the 40″ by 6.” rectangle of fabric, right sides together, with the short end of the zipper portion.

Sew each side with a 1/4″ seam allowance.

Press with an iron. You should now have a circle of fabric with a zipper on one side. This constitutes the perimeter of the circular pouf.

In order to later attach the top and bottom to our perimeter, we need to make notches that mark each quadrant of the perimeter on both the pouf sides and circular top and bottom.

To do this, fold the perimeter fabric such that each end of the zipper meets each other and make a small snip marking the halfway point.

Make another small snip at the other side of the perimeter.

Fold again, so that each notch mark meets itself and create notches in the sides.  This will create a notch mark in every quarter of the perimeter piece.

Repeat the same thing with the circular cuts of fabric.

First fold the circle in half, snip at each end.  Then fold again and snip notches in the remaining sides.

Using one of the circular cuts of fabric, align a notch with one of the notches on your perimeter piece, right sides together.

Continue to match notches on the perimeter with those on the circular piece.

Once you have matched up all quadrants with each other, begin to pin all along the raw edges.

Sew along the pinned edge with a 3/8″ seam allowance.

Open up the zipper and repeat with the other circular cut of fabric. Pinning and sewing in place, just as you did before.

Turn your pouf right sides out!  Now you can insert your re-shaped foam tuffet.  To do this squish it and gently insert it as you squish so you don’t put too much pressure on the zipper.

It should fit nice and snug.

Admire your beautiful creation, bring out the olives and invite over some friends!